CHILDREN RAISED BY HOMO PARENTS: HOW UNSERIOUS (AND UNRELIABLE) THE STUDIES ON THE ISSUE 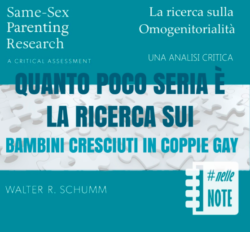 Dear friends and enemies of Stilum Curiae, we want to talk about  a very interesting article found on the “Nelle Note” website, which deals with a research carried out by an American professor Walter R. Schumm, on the studies meaning to show that children raised in homosexual couples do not differ in anything compared to those raised by a man and a woman. It is the hypothesis of “no difference”, obviously supported by the LGBT lobby and uncritically swallowed and propagated by the mass media. On the site you will find links to the text, which obviously is not widespread because it is contrary to political correctness. Here we offer our translation of the presentation of Nelle Notes.

HOW UNSERIOUS IS THE RESEARCH ON CHILDREN GROWING IN GAY COUPLES

RESEARCH ON “HOMO-GENITAL” – A CRITICAL ANALYSIS

It is widely believed that there is “no difference” between how the children of homosexual parents and those of parents of the opposite sex grow. Professor Schumm, a distinguished social science expert, has conducted the most comprehensive research study to date, and in this book shows that this conclusion is false.

In this extremely valuable and in-depth volume, you will find everything you could want to know about the research of social sciences on the subject of homosexual parenting. Research on this topic is relatively new, for the simple reason that having many children raised in same-sex families is a fairly recent innovation.

But for several decades now, many people have been trying to argue that children in homosexual families grow just as well as in heterosexual families – perhaps even better. A number of studies have appeared on this topic, and many of them follow the idea that children raised by two homosexuals or two lesbians are fine, even more than fine. This is the  “no difference” hypothesis.

Schumm, a professor of family studies at Kansas State University, examines these researches in great detail and shows that most of them are incomplete, distorted, selective or politicized. Schumm says: “In this book I will examine and report these results in more detail than most scholars have done. The results will show, at the very least, that the situation is more complicated than many have conceded or, at worst, that the way in which the research has been interpreted has been largely aimed at favoring progressive values​​”.

This truly indispensable volume is divided into six parts.

He proceeds with an in-depth reflection and asks in conclusion what kind of research is conducted and what it involves. For example: “Have all relevant variables been measured and tested? Have all the subpopulations been studied? Have the best statistical models been tested appropriately? ”

Part 2 examines what we know about same-sex parents. It makes clear how so many numbers are blatantly denied. Some have even suggested that there are 6 to 28 million children raised in these homes in America!

After a careful and thorough look at the data and the methodology used, Schumm claims that the numbers are much closer to 300,000. So some of these estimates should be reduced by a factor of 50! Once again, politics and ideology seem to prevail over the facts.

Other chapters focus on family stability in various types of families and on the issue of sexual abuse. Regarding the latter, he concludes: “Insufficient high quality studies have been conducted in this area to draw definitive conclusions about homosexual parents who abuse their children, while there is much evidence that in the LGBT adults pasta life there have been frequently child sexual abuse”.

Parts 3 and 4 give a very careful look at the children of these families and how they live. The various statements made about positive outcomes for children raised in same-sex families are meticulously examined, and most of them are found to be lacking.

For example, consider the frequent claim that having homosexual parents makes no difference in the way children develop in terms of sexual preference. Schumm says: “There are now dozens of studies that seem to disprove the “no difference” hypothesis and only a few that substantially (in terms of the size of the effect, if not of statistical significance) do not reject it”.

As regards the results on the various aspects of children’s mental health, once again, the “no difference” statements do not stand up well to a more thorough examination.  These conclusions are often and simply drawn by asking parents of the same sex questions about the mental health of their children. This is certainly not a scientific or objective method to determine such arguments.

“Until the studies systematically check the pre-existing differences between the two groups, that of the parents and the control group with regard to “social desirability”(the tendency of some interviewees to report a response in a way that they consider more socially acceptable than their “real” answer would be), I doubt we will get light on this issue. From a scientific point of view, it is not correct to take a group of highly educated and wealthy people, mentally healthy homosexual parents, and compare their children to the children of uneducated, poor, mentally ill heterosexual parents and think they have made a fair comparison “.

Part 5 examines the consequences of same-sex marriage. It is argued that same-sex marriage does not lead to negative repercussions for heterosexuals. Anecdotal evidence alone should refute this. But a lot of real evidence is examined, including how fertility rates are negatively affected.

Finally, part 6 offers some conclusive thoughts, such as the following:

“I regret the fact that many US courts have been deceived into accepting a distorted, incomplete research focused on significance levels rather than effect sizes as valid. Numerous studies have been neglected whose results would have caused problems to the   “no difference” hypothesis. Parenting research in same-sex couples has often been cited because it has reached politically correct conclusions, not because it was of the highest quality: in a sense, this book is an attempt to correct this imbalance”.

He reminds us that much of the pro-homosexual research of the “no difference” type is full of phrases like “not a single study” and “no evidence” and “irrefutable scientific evidence” and the like. Schumm calls this dogma, not science.

All this is due to the politicization and the lowering of the level of social science quality in the interest of promoting an agenda – in this case the radical homosexual agenda. As a result, “it appears that significant amounts of ‘facts’ have been ignored or suppressed in the process of promoting this agenda.”

Schumm has made clear in this book the result of in-depth research that “scientific consensus” can often be wrong. And he provided us with a great deal of examples of social science to support this. In fact, he states that it is striking that “90% of the over 70 literature reviews have drawn wrong conclusions on some aspects of same-sex parenting”.

And after this exhaustive examination of about 400 studies on the parenting of same-sex couples, the fundamental truth is this: “There seem to be significant and substantial differences between same-sex and heterosexual parents and in the long-term results of their children, contrary to many, many conclusions of numerous scholars of social sciences in recent decades”.