THE THREE-CARDS TRICK POPE. AND PACHAMAMA’S. 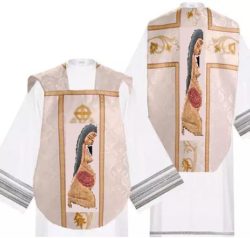 So he did it again. But this time with even greater arrogance than the previous ones. In a nutshell: he organized a local synod – which should have been carried out locally, to examine locally any local problems of a situation involving a few million faithful on the one billion and three hundred million of the planet – to pass changes, like the tip of the wedge, that twill be quickly seized by interested bishops here and there, everywhere, and that would not have been approved if they had been submitted to the examination of a “true” world synod.

I try to explain to non-Catholic friends and colleagues what happened. The German episcopal conference, which is the largest donor to the Holy See, and which consequently thinks it can dictate its policy, wants changes in various points of Catholic doctrine. Priest celibacy, the role of women, lay people, same-sex marriage, etc.

Germans have also been great donors to the Church in Brazil for decades, and Brazilian Liberation Theology, later to become Indian Theology, was born in Germany, and thrives in Brazil thanks to bishops of German origin: Krautler, for example, great inspirator of the Synod (and photographed walking around Rome holding a unknown lady by the hand …) who boasted that he had never baptized an Indian; and Spengler, and Hummes, and others.

The changes wanted by the Germans, if submitted – as it should be, since they then reverberate on the whole Church – to a collective examination of the bishops of the world, would not have passed. Then the synod of the Amazon Synod was invented, seasoning it with a bit of environmentalist sauce, so fashionable today, in the language of the Masters of the World, and therefore also in his, the Pope’s.

But why in Rome? Here lies the cunning: on the one hand, being a “local” synod the majority of the participants are “local”, that is bishops of the part favorable to the modifications; and therefore you are sure that even if consultative, the proposals pass. But if you do it in Rome you have an immediate upgrade in the results; so much so that the Pontiff has announced that he hopes to release the Apostolic Exhortation, following the Synod, in the next two months, which will certainly incorporate what the local synod has recommended, but being made by the Pontiff may not have an effect on the whole Church …

That’s why I’m talking about the Pope of the three-cards trick. Because this sneak is unworthy of the clarity and transparency that is expected of the Church: it has a scent of clerical and Jesuit cunning in the worst sense. And everything suggests that the Apostolic Exhortation is already prepared, at least in its essential lines; sixty days are very few, to study and prepare a document, if the Pontiff really did, full of commitments as he is (including a trip to Thailand and Japan). Perhaps it does not lay in the Pope’s office, but in that of some of his collaborators.

Below we briefly list, thanks to the courtesy of a Para-vatican site, the essential points:

<The proposal to “ordain priests suitable and recognized men of the community, who have a fruitful permanent diaconate and receive adequate formation for the priesthood, being able to have a legitimately constituted and stable family” (111); the desire to share “experiences and reflections” with the Commission on the female diaconate, and the observation that many in the Amazon have solicited this solution (103); the request that “the instituted ministry of” woman leader of the community “be created” (102); the need to “give an authentically Catholic response to the request of the Amazon communities to adapt the liturgy by enhancing the vision of the world, the traditions, the symbols and the original rites that include the transcendent, communitarian and ecological dimension” (116 and 117), the proposal of a commission for the “elaboration of an Amazonian rite” (119) and the rejection of “an evangelization in colonial style” (55). These are some of the recommendations approved by the Synod on the Amazon (6-27 October) in a final document rich in themes (cultural, ecological, social and pastoral) now entrusted to the Pope, who has already announced his intention to draw from it in the coming months a apostolic exhortation>.

Of course, the problem of ministries for women is difficult to solve, because the previous Commission, charged with studying the problem, had a negative result. And apparently the deaconesses of the first Church were nothing ministerial. But don’t worry: the Pontiff has already announced a new commission, with new people … who wants to bet that the members who were against, will no longer be called, and that the Commission will go on until they will find that in fact, in some area lost in the Caucasus, women in the Church, in the sixth century ….?

The good news, at least for the writer, is that in spite of the composition of the synodal audience, despite the total lack of transparency (shameful, in a Church that proclaims it in words) and of free information on the works, on 181 voters, on the issue of the Viri Probati (art. 11) there were 41 no. And that for the resumption of studies on the female diaconate there were 30 no. That is: there are those who are not afraid to defend the Magisterium of all time.

The Pontiff must also have noticed this, because, as usual, and like any displeased despot, he warned and scolded. We report from Vatican News, official website:

<To the mass media: he didn’t lose anyone, we all won

Finally, Francesco thanks the synod secretariat and all those who have worked in the organization, and asks the media, thanking them for their work, that in the dissemination of the final document, “they should follow above all the part of the diagnosis, which is the strongest part ”, cultural, social, pastoral diagnosis, ecological diagnosis. And do not stop to look for what “they decided on the disciplinary issue” or do not wonder if “he lost that party, that other party”.

This is also because “there is always a group of Christians, of elites, who like to pose as if this kind of diagnosis were very small, this kind of more disciplinary resolutions”. “No – the Pope declares strongly – we have all won with the diagnosis made and we continue to move forward in pastoral and inter-church matters”. These elites, today, “above all Catholic”, lamented Pope Francis “who cares about little things and who forgets about the great”. “Because – and cites Peguy – they do not have the courage to engage in the options of man and in the solutions of human life, they believe they are fighting for God. Because they love nobody, they believe they love God”.

The next Synod could be on synodality

The Pope informs that he would like to be able to publish “before the end of the year, so that not too much time passes”, the Post Synod Exhortation. “Everything depends – he explains – on the time I will have to be able to think”>.

Your Holiness, please! The elites are those of the 70s theologians and bishops, who run around holding hands with unknown females, and try to revive theses and practices that in Brazil alone cause every year hundreds of thousands of Catholics to abandon a ideologized Church; and the same happens in the Amazon. While a growing number of “normal” Catholics look in dismay, confused and disappointed, to the ecclesiastical show.

We close with what a priest, already Anglican and now Catholic, writes in commenting on the Synod: “For the first time since my conversion to the Catholic faith I don’t think if I was an Anglican now I would have bothered converting. Don’t get me wrong I’d never go back to Anglicanism…but I don’t think that if I was an Anglican now I’d see the point of being a Catholic. At the moment the Catholic Church is simply offering what Anglicans were promoting 20 years ago … just before they collapsed … it’s embarrassing”.