MY APOLOGIES TO STILUM CURIAE. I AM NAIVE. BUT THE VATICAN SINKS IN THE RIDICULE.

Dear friends and enemies of Stilum Curiae, trolls and usual annoyers, I owe you an apology. Do you want to know how naive, full of trust in human nature, even that of the Jesuits, even that of certain ecclesiastics and some pope is the person who is writing these lines? Now you know. Yesterday, when I read the launch of I-Media, I thought: at-a-boy! Maybe something is happening! All the prayers for him worked! The Pontiff understood that what was happening around him, above, below and behind him was a little too much, and he expressed it.

Do you remember? The launch said this: <Pope Francis, “as bishop of Rome” asks “forgiveness” to those who have been offended by the figurines thrown into the Tiber. These had been exhibited “without idolatry” in a church near the Vatican, he recalled>.

Offended by the statuettes, thrown into the Tiber; not because of the launch of the statuettes in the Tiber; and this formulation has deceived me. Being, as I told you, despite age, the rips-off received and the white hair always willing to see good in others, I interpreted the phrase as an apology to Catholics, who have seen in his diocese – bishop of Rome – strange objects, strange things and strange behaviors.

Instead … here is the statement that the pontiff has given:

Good afternoon, I would like to say a word about the pachamama statues that were removed from the Church at Transparency, which were there without idolatrous intentions and were thrown into the Tiber.

First of all, this happened in Rome and, as a bishop of the diocese, I ask pardon of the people who were offended by this act.

Then, I can inform you that the statues that created so much media were found in the Tiber. The statues are not damaged.

The leadership of the Carabinieri will give the public the opportunity to take the lead, for example, the commander said, “the display of the statues at the closing Mass of the Synod. ”We’ll see.

I delegate the Secretary of State to respond to this.

This is good news, thank you.

I would like you to underline a couple of points. First: “without idolatrous intentions”. But in the same communiqué of the carabinieri, as you will see, it is written that the statues had been “taken from a side altar of the aforementioned church where they were used for prayer by the” Itinerant Team “. Were they used for prayer but there was no idolatrous intention? How to reconcile these two conflicting statements?

Then we touch on the ridiculous (and perhaps more) when to the commander of the Carabinieri is attributed, quoting, the idea that there may be, “the display of the statues during the closing Mass of the Synod”.

Ambiguously, says the pontiff, “we will see”; and discharge the hot potato into the hands of the Secretary of State. Why? Isn’t he the boss? Below you will find what the carabinieri say.

Subsequently, the Carabinieri Command issued a statement on the recovery made in which it reads:

“The Carabinieri of the Compagnia Roma San Pietro, during the investigations led by the Coordinator of the Cultural Heritage Protection Group of the Rome Public Prosecutor’s Office, Assistant Attorney Dr. Angelantonio Racanelli and by the Deputy Proc. D.ssa Maria Bice Barborini and connected with the theft of statuettes ascertained on the morning of October 21st inside the Church of Santa Maria in Traspontina in Via della Conciliazione in Rome, they recovered 3 of the artefacts removed, depicting a “pregnant woman “.

The same after having been stolen from a side altar of the aforementioned church where they were used for prayer by the “Itinerant Team” – a Catholic group with headquarters in South America that takes part in the Synod on the Amazon underway in the Vatican – had been thrown into the Tiber from Ponte Sant’Angelo. 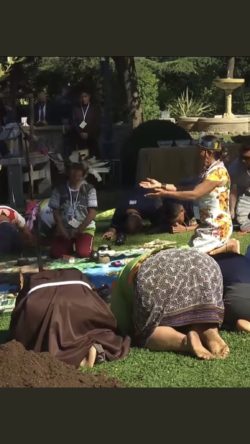 And finally, I would like to show a photo again. That of prostration – denied in the presser – that took place in the Vatican gardens, under the eyes of the pontiff, in front of that paraphernalia of pachamame, earth, priapi etc. but “without idolatrous intentions”. But when friars nuns and priests do so, is it to stretch, do gymnastics, or look for something that fell to the ground? And this also in response to certain colleagues, particularly international agencies, who claim that the criticisms of the Synod are biased. Even intellectual indecency and servility to the Powers should know limits. And do not prostrate before the Pachamama.