Dear Stilumcuriali, as usual I write to you from to time to inform our  community about the progress of the website. And in the community, in addition to the aficionados, I also include those to whom the freedom of thought, and expression, and debate of Stilum Curiae is a cause of much, much discomfort.

All this just to tell you that yesterday, Sunday 8 September, Stilum Curiae touched and passed eleven million views.

As you remember, Stilum came to light on the web less than three years ago, and precisely in October 2016. It was a winning bet; I am attaching some screenshots of the figures, which show a constant growth in the daily entrances. The first figure refers to 2016, the last to 2019. 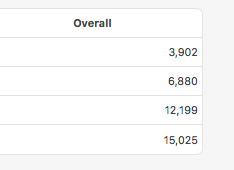 It is a clear sign that Stilum is interesting, and it is interesting; and the confirmation also comes from its security system, which has foiled, in this period, more than 87 thousand malicious attempts against Stilum. When I read the figure I didn’t want to believe it.

We will try to do even better. And in the coming days we will deal with this issue, discussing it with the agency that created the current aspect of Stilum Curiae and treats it in health and disease …

It is the right time to thank the collaborators, those with a face and a name and those forced to conceal their identity behind a pseudonym, and who make the menu of Stilum Curiae rich and varied.

And it’s also time to thank those who have chosen to help Stilum with a donation: in addition to helping to cover the costs, which exist, your gesture is important to me; it confirms that I am doing a job – and I assure you that it is a job, from the awakening in the morning until I turn off the last light in the night – which has a meaning, and a value, for many people.

I would like to thank each of you personally, and consider that I did it; with a hug and a handshake. Thank you for being by the side of with Stilum Curiae.

On the other hand 70 thousand moderated comments, not to mention spam and other, testify both to the weight of the commitment and to the interest. And I think I’m not wrong if I believe that behind every comment there are many people who read without intervening.

Then, thank you. For me, this is a battle of information and freedom, and my intention is to continue to fight it.

THAT  STILUM CURIAE IS USEFUL?

THE INFORMATION WOULD NOT BE THE SAME?