CATTOLGBT. POOR UGANDAN MARTYRS! HOW MANY PEOPLE IN THE VATICAN WOULD GIGGLE AT THEM, KING’S PAGEBOYS… 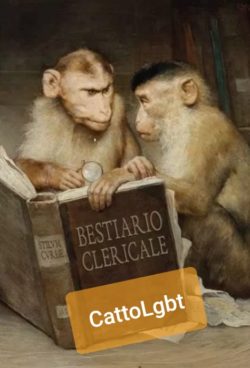 Yesterday the Church celebrated the memory of the Ugandan martyrs, the Saints Charles Lwanga and companions, who were killed in atrocious way; not so much because they were Christians but because their king, Mwanga, wanted them sexually. And they refused. As Christians. From Basta Bugie we report their story, inviting you to read the entire article here.

Those Ugandan martyrs were not so much killed because they were Christians but because, as Christians, they refused to comply with the lustful cravings of their king Mwanga II. They were all males and even the king, so they were homosexual cravings. This, of course, sounds strange to the ears of those who are constantly complaining about “violence and discrimination against the gay community” (again, the Guardian), but in 1885-1887 (martyrdom) things were exactly the opposite. The Ugandan martyrs were pages and royal bodyguards, all aged between fourteen and thirty. They had been baptized by the White Fathers, French missionaries founded by Cardinal Charles Lavigerie, and they were all young and among the most beautiful and handsome of the Buganda kingdom. The first to lose his head in 1885 was Joseph Mkasa Balikuddembé, prefect of the king’s room. When the latter tried to stretch out his hands on the court pages, he objected and was immediately beheaded. He was twenty-five.

The following year it fell to Charles Lwanga, chief of the royal bodyguards. King Mwanga II had a very particular concept of the duties of his “body” guards, and perhaps it was normal for his subjects to satisfy him, since in a tribal system of those times and places everything, even lives and bodies , were at the complete disposal of the king. But with the Christians the music changed. It was for this reason that Charles Lwanga and twelve other young men ended up burning on the Namugongo hill. Several others followed, some of whom had been baptized by Anglican missionaries (the famous English explorer Stanley had discovered the Bugandas ten years earlier and had proposed to have them evangelized). They were dragged into chains and tortured by the way, in order to “give an example” to all the others. Some died on the street under the blows of the spears, the others ended up at the stake.

Poor Ugandan Saints! Today certainly the music for them in the Church would be different today, as evidenced by the indefatigable activist legbtsj father Martin, with this twitter addressed to the participants in the June Gay Prides. 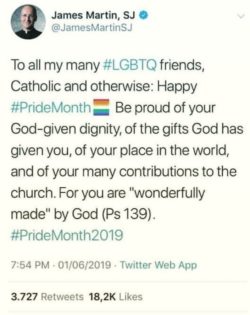 Now they would certainly find some good priests who would explain to them that after all, King Mwanga was a case of homo-affectivity that was a bit pushy, that Jesus had never said that one should not practice sodomy, that Paul was the fruit of his time (and this it is nonsense, because it is enough to read the story to see that there were emperors and others who celebrated “marriage” with males, or even read Catullus to realize that there is nothing new compared to two thousand years ago; but the politically correct and the LGBT dictatorship in the media and in culture).

But why did they become martyrs at all, you might say! Of course. When the Vatican seems to be full of this kind of people (see the rumors of Martell) and above all the testimony of Carlo Maria Viganò, when he writes that already at the time of Benedetto the situation was this: “I believe that this was due to the then Pope’s first collaborator, Card. Tarcisio Bertone, notoriously in favor of promoting homosexuals in positions of responsibility, usually managing the information that he considered appropriate to send to the Pope”. And again: “As already mentioned, the cardinal had no difficulty in persistently presenting notoriously homosexual candidates for the episcopate, as we see from the well-known case of Vincenzo di Mauro, appointed Archbishop of Vigevano, who was then removed because he was harassing his seminarians – and to filter and manipulate the information that was sent to Pope Benedict”. And always from the testimony of Msgr. Viganò let’s take this note about the Pontiff: “Moreover, he named the Brazilian Ilson de Jesus Montanari – the dear friend of his private Argentine secretary Fabian Pedacchio – Secretary of the same Congregation for Bishops and Secretary of the College of Cardinals, promoting him in a single leap from mere official of that Dicastery as Archbishop Secretary. Something never seen before for such an important task!”.

Poor Ugandan martyrs. Who knows what naive figure they would do today behind the Walls! How many giggles behind them. How perhaps we laugh at the courageous stance of Bishop Thomas Tobin who recalled in a statement that the Gay Prides, scheduled for the month of June, propose values ​​far away from the Catholic values; and therefore it is appropriate that Catholics do not participate in it. Of course the hordes of politically correct and LGBTQ have been unleashed on social media against him . In this regard, those who wish can sign a petition supporting the bishop on this site: